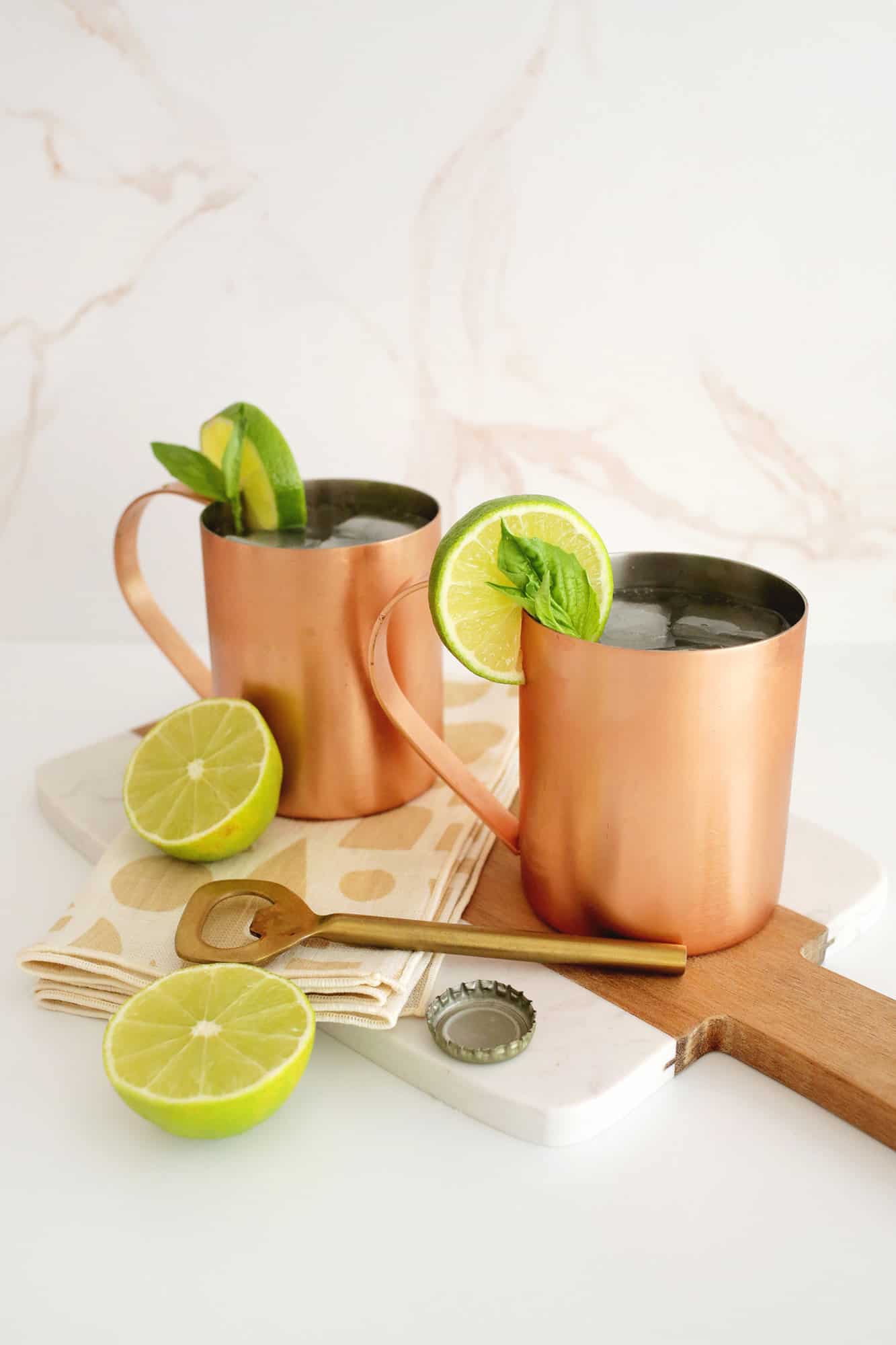 The Moscow Mule is a classic cocktail that has withstood the test of time for good reason! The spicy ginger beer paired with vodka (and a splash of lime) has been delighting fans for decades.

And while there are many ways to put a twist on this iconic drink, the classic is still a winner every time.

The drink was invented back in the 1940s in America when John Martin wanted to sell Smirnoff vodka through his distribution company.

It was not a popular liquor at the time, and coincidentally, bar owner Jack Morgan was trying to sell off the ginger beer at his Cock ‘n’ Bull pub. So, they added them together with a little lime and made cocktail magic.

Do you have to use a copper mug for this drink? Not at all! While it does add to the tradition and fun aspect of a Moscow Mule, the copper mug is completely optional. You can serve it in a rocks glass or any other glassware you like.

Looking for a variation on a Moscow Mule? Try:

What is Ginger Beer?

If you’ve never tried ginger beer it’s a nonalcoholic “root beer” soda. It’s not the same thing as ginger ale—it’s less sweet and can be spicer, too.

I like to think of ginger beer as ginger ale’s cooler, older sister. If you don’t drink, you should try it with lime juice. SO good!

Why do they call it a “Moscow Mule”?

Supposedly, the drink got its name from its ingredients as vodka was usually associated with the country Russia (and Moscow is the capitol of Russia) and the ginger beer gives the drink a kick the way a mule would.

What ingredients do I need for a Moscow Mule?

How to make a classic Moscow Mule:

Which type of vodka is best for a Moscow Mule?

Choosing a brand or type of alcohol for your Moscow Mule is mostly a preference-based decision, but if you want to be the most authentic, you can choose Smirnoff brand vodka as that’s what was used in the original concoction.

Which type of Ginger Beer is best for a Moscow Mule?

Ginger beer comes in a varying degree of ginger “spice” levels depending on the brand, so you can choose a more mild or more intense flavor based on your preference for spice. Some of the options are:

The Spiciest Ginger Beer: Goya Jamaican-Style Ginger Beer being very spicy is a little harder to find in stores but is available online.

A Medium Spice Ginger Beer: Fever Tree brand is a solid but medium level spice option for ginger beer (and is easier to find in stores).

The Lowest Spice Ginger Beer: Parker’s Ginger Beer is a great option for “beginners” since it’s a low spice option. Or, you could also try a ginger ale that tends to be less spicy and a little more sweet.

Best Option for Budgets: Goslings Story Ginger Beer is a solid option that’s easier to find in stores and gives you a good amount of ginger beer for the price.

Why do they serve Moscow Mules in copper mugs?

Part of the origin legend of the Moscow Mule that says the vodka seller and ginger beer seller met up with a woman that also needed to unload her inventory of copper mugs, and the three of them came up with the drink components together.

The copper of the mug also keeps the drink frosty cold since it’s very good at conducting temperature (much better than traditional glass cups would be), so it’s a better choice when possible just to keep the temperature cooler longer.

Click here to buy copper mugs for your moscow mules!

Can you make a nonalcoholic Moscow Mule?

Yes! Simply leave out the vodka and fill the glass with ginger beer and lime over ice, or you can add a nonalcoholic vodka like this one.

Make a tweak and turn your Moscow Mule into a …

Dark and Stormy: The difference between a Moscow Mule and a Dark and Stormy is that you substitute rum for the vodka to make it a different variation on the drink. It’s slightly sweeter and really good.

Kentucky Mule: Also known as an “Irish Mule,” the difference between a Moscow Mule and a Kentucky Mule is that you substitute bourbon for the vodka. Still a great choice, and just comes down to what your favorite liquors are!

Be sure to check out some of our other favorite cocktails, too!

A.J. Cook Talks Her “Criminal Minds” Audition, Gearing Up For The Reboot, And Meeting Matthew Gray Gubler For The First Time Should I Buy a Sectional? Find The Best One For You!